AYDEN, NC- Known far and wide as the capital of Eastern North Carolina-style whole-hog, wood-cooked barbeque, Ayden will host their 3rd annual “Kings of Q” BBQ Cook-Off & Festival in Downtown Ayden Friday, May 18th and Saturday, May 19st. The BBQ Cook-Off will be held in the “BBQ Village,” centered around the Ayden Christian Church located at 462 Second Street, and the Festival will be held two blocks to the east along West Avenue.

New this year:  On Friday and Saturday, festival attendees can purchase KCBS competition-style BBQ from three vendors, as well as Skylight Inn BBQ, on the midway! Attendees can enter to win an Oklahoma Joe’s Longhorn Grill (charcoal, gas, and smoker in all-in-one) valued at over $500. And $25 ride wristbands will be honored all day Saturday.

The BBQ Cook-Off is a North Carolina State Barbeque Championship sanctioned by the Kansas City Barbeque Society, the world’s largest organization of barbeque and grilling enthusiasts. KCBS certified judges will be on hand Saturday to blind judge entries from four categories (chicken, pork ribs, pork, and beef brisket) starting at noon.  All four categories are required for Grand Champion and the Reserve Champion. The team receiving the highest combined score in all 4 categories will be declared the Grand Champion qualifying them to compete on a national level in the American Royal World Series of Barbecue, in Kansas City, Missouri, and will be entered into a drawing to compete in the prestigious Jack Daniel’s World Championship Invitational Barbecue in Lynchburg, Tennessee.

Entry forms for the BBQ Cook-Off, Festival Vendors and Sponsorship information can be found at www.aydenbbq.org.   ​ 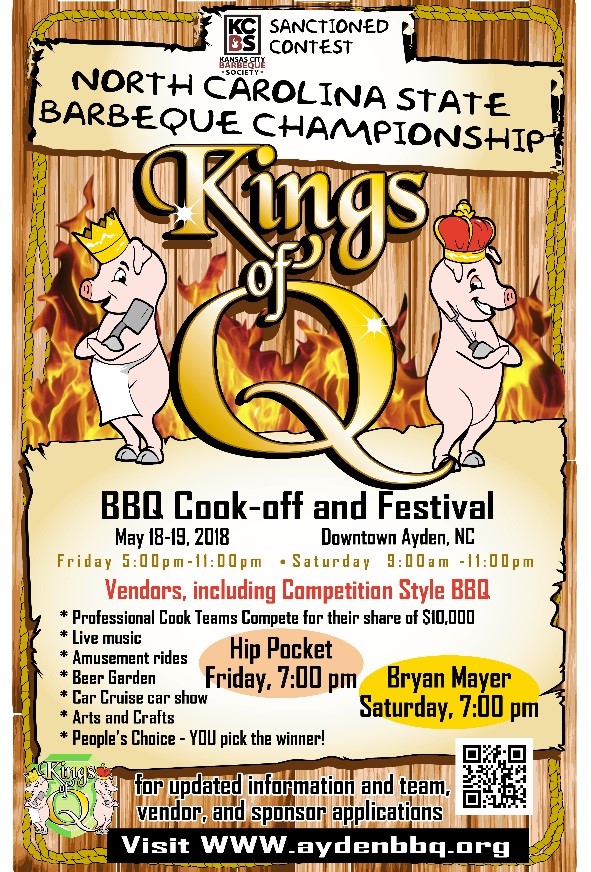